Each year, quite close to the June winter solstice (Southern Hemisphere), and upon the reappearance of the Pleiades constellation, thousands of pilgrims participate in the religious festivity of the Lord of Qoyllurit´i. The celebration takes place in an area between the Mountains Qolqepunku and Sinakara, over 5,000 meters in altitude, in honor to the Lord of Qoyllurit´i (Shining White Snow), who has His Sanctuary in a geographical depression, very close to several glaciers.

For the indigenous communities, Mounts Qolqepunku and Sinakara are Sacred and possess the status of Apus. For example, the Apu Qolqepunku is said to have the faculty of healing; that is, He is a “Healing Apu”.

The Sanctuary is located in the District of Ocongate, Province of Quispicanchis and Region of Cusco.

ORIGINS OF THE FESTIVITY 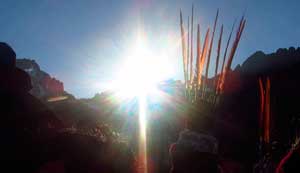 As ethnographic works, analysis of the festivity´s components, and ethno-historic data confirm it, the origin of this festivity is pre-Colombian. Qoyllurit´í is a rite of passage related to the cycle of the Pleiades constellation, and proximity of the June winter solstice.

Nowadays, that religious festivity is controlled by the “Brotherhood of the Lord of Qoyllurit´i”; an organization subject to the Catholic Church. The official version, publicized by the church, in relation with that festivity´s origin, dates back to 1780 (Year of the indigenous rebellion lead by Tupaq Amaru the 2nd, against the Spanish Colony).

The legend tells that, in the vicinity of the Qolqepunku Glacier, a young man, with fair skin, had appeared to an indigenous child, called Marianito Mayta. Apparently, that strange personage, who called himself Manuel, had made it so that the child´s alpacas, lamas and rams would multiply, and he helped him to watch his herd, while he would be spinning wool.

As they heard about this, the ecclesiastic authorities decided to find out what was happening, on the site, on two occasions. The second time, when the priest and his accompanying party tried to come close to the strange personage, who was standing at the foot of a rock, he started to irradiate a bright shining light, and then, converted himself into a wooden crucifix on which a Christ was agonizing. As he saw that his friend was no longer there, Marianito; the indigenous child, died of sorrow, at the foot of the very same rock, where he was buried.

Today, in the church, one can see the effigy of Christ, painted on that rock, at the foot of which the Young Manuel transformed himself into a crucifix.

It is interesting to see that the analysis made by scholars, of the legend we have just described, points at an indigenous cosmologic tale which would have been modified, to give it a Christian hue.

The huge quantity of pilgrims (Between 20,000 and 30,000) can be classified in two categories: Individuals and groups of dancers, called “comparsas”, with their respective groups of musicians. Each “comparsa” is composed of about twenty-five participants, and the musical group, of four of five musicians.

The majority of pilgrims undertake one night trip, by bus or on trucks, to get to the village of Mawayani, on Trinity Sunday and, from which they start to climb up to the Sanctuary, stopping at every one of the fifteen landmarks, indicated by a cross, as the last one is the church itself, built in the Sanctuary. Several of these crosses were posted there, well after the preexisting pre-Colombian “apachetas”. In the indigenous religion, the “apachetas” highlight liminal places, in which there also is the custom of accumulating these marking stone mounds.

In the course of their ascent, the “comparsas” ceremoniously greet each landmark, as they are accompanied by praising music, called “Alabado”. Once in the Sanctuary, the pilgrims set their campsite, in its immediate surroundings, grouped according to their place of origin, as “nations” which are eight, in total.

Among the Sanctuary´s most sacred sites, there is the Sacred Rock, on which the effigy of Christ is painted, called the “Lord of Qoyllurit´i” (See the legend described above). Currently, the church is built around that Sacred Rock. Then, the second Sacred Site is the Virgin of Fatima´s Rock, upon which that Virgin appeared. In ancient times, these two rocks were considered as “Wakas” or Sacred Places.

The celebration takes place amidst music, dances and processions. In addition to this, there is the Ceremony of the Crosses, carried-out by groups of Ukuku (half-man and half-bear dancers) from the nations present, who climb up to the glaciers, carrying crosses, to then stick them upright in the snow, along with lit candles, in such a way that the whole glacier becomes an ardent church.

During the night, between Monday and Tuesday, once more, the Ukuku climb up the glacier, to perform several penitence and initiation ceremonies, on the ice, and then, they walk back down, carrying the crosses and blocks of ice, the thawed water of which is considered to have healing properties. Then, at the foot of the glacier, the Ukuku meet all the “comparsas” and, all together, they initiate the highest point of the festivity which ends with a mass and last procession.

Once the festivities over, as their complement, one last long procession takes place, at the term of which the effigy of Tayankani´s Crucified Christ is returned to Ocongate´s Church, escorted by dancers and musicians. That circuit is called “of the 24 hours”, since it lasts about two nights and a whole day. The context of its two representations is indigenous: The first is the Ceremonial Greeting to the Rising Sun, with the observation of its aspect, which will allow for predictions on whether the forthcoming year will be good or not, while the second presentation, performed by the pilgrims, is an impressive collective choreography, in the course of which they form waving figures, as they separate and crisscross each other, to symbolize the union of all participating nations, under the sight of the Sacred Mount Ausangate; the Southern Andes´ most important Apu. 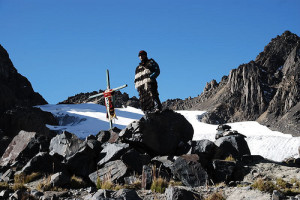 During the Qoyllurit´i, devotion is expressed through music and dances. There are three principal Andean mythological characters represented through costumed dance: the Ch´unchu, Qhapaq Qolla and Ukuku. Originally, that festivity had an eminently pastoral character, and only those three figures were part of the Lord of Qoyllurit´i´s Festivity. It was only from the seventies on, that competition grew, as much on the part of individuals, among Peruvians and visitors, as on that of the “comparsas” which are now more than four hundred.

The representation of the Ch´unchu or habitants of the jungle, Qhapaq Qolla, from the High-Plateaus, and groups of Ukuku who are half-man and half-bear dancers, are the synthesis of complex myths, rites and symbols that are part of the Andean culture´s spine, so as to say. Finally, the analysis of their costumes, as well as that of choreographies and play-roles they present during the celebration, opens a window towards the fascination and magic of a culture, the origin of which is millenary and ancestral.