The Virgin of the Carmel´s festivity, in Pisac

This year, we have done a follow-up of the Virgin of the Carmel´s Celebration, in the village of Pisac. This celebration takes place between July 15 and 18, and is the largest and most pompous one of the year, on that village´s Calendar of Festivities.

Pisac is the main locality of the district that bears the same name, which is part of the Province of Calca, and is especially known for its archaeological site and handicraft market. The distance between Calca; our location, and the village of Pisac, is 18 kilometers, or about 20 minutes by car.

The celebration displays a complex cultural condensation, which practically converts itself into a total social fact. Therefore, on one side, one can see the Andean agricultural feature and, on the other, the celebration which, through the dancers, stages our complex Andean history, which a diversity of social and ethnic groups were and are still part of. They are inhabitants of the jungle and high plateau, as well as merchants from the coast, in the Republic´s time period, along with slavery and the black race, armed conflicts with neighboring countries, in past centuries, bureaucracy and Republican justice, ancestors, mythical beings and entities from the Supra and Infra-worlds.

Indigenous thought patterns come-up, together with their cosmology, relegating, in many aspects, what it ought to be, in a strictly Christian sense. Apart from the celebration´s character which denotes a transition rite, the dancers´ costumes, as well as their iconographies and choreographies show complex signs and symbols of a polysemic kind. We consider that the magic of celebration and, especially, that of the masked dancers, resides in knowing how to decode that information, which allows us to comprehend the Andean Cosmos.

The popular tale about the apparition of the Virgin of the Carmel´s effigies, in Pisac, tells that, at the end of the 19th century, on a private farm, situated about half a kilometer from the village of Pisac, both effigies were found, one after the other, in the farmhouse´s vicinity; reason for which they are considered as twins, although one is taller than the other.

The celebration highlights the mestizo identity, and around twenty groups of masked dancers enhance it, according to a participant´s words: “Without them, the celebration would have no soul”. Therefore, we present, in this text, a panoramic description of each sequence of the celebration, so as to provide an idea of its corpus. 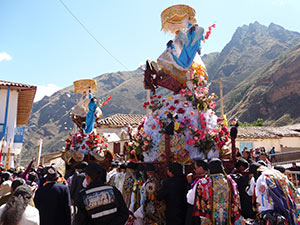 The Minor Virgin´s transfer, from the farm, to the village of Pisac, starts in the course of the afternoon. All groups of dancers, dancing to the rhythm of their respective groups of musicians, and led by their stewards (sponsors), as well as the village´s authorities, escort the Minor Effigy which will meet with its dual effigy (the taller one), on the Main Square. In the meantime, the whole procession is led by a couple of personages with their faces painted in black, who drive a donkey with a load on its back. 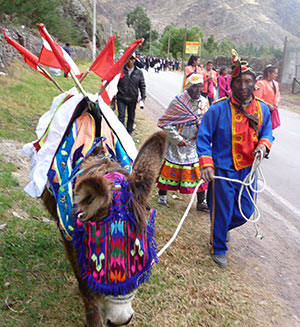 Then, both Virgins meet on the Main Square, to parade along the village´s main arteries, in a procession. When dusk draws near, and the procession has come to its end, the celebration starts on the Main Square, with a Peruvian step-horse show. All along the way, the groups of dancers wear gala clothes. In fact, it is only on the following day that they will wear their dancing costumes and masks, which produces a great transformation in those festivities. Now, masked male characters, disguised as women (waylakas), appear on the square.

At nightfall, groups of musicians go round the square, playing their instruments, along with the dancers, whilst other ensembles, located in specific places, interpret chants and diverse musical pieces, in such a way that a pluralized acoustic encounter takes place which, due to its varied tones and melodic rhythms, is heard as a sort of cacophony, while this event is complemented by a firework presentation. Well into the evening, the faithful dedicate a “Happy Birthday” song, as well as a birthday cake to the Virgin. Then, at midnight, the group of dancers, called “Qhapaq Negro” is responsible for offering a serenade to the Holy Effigy. 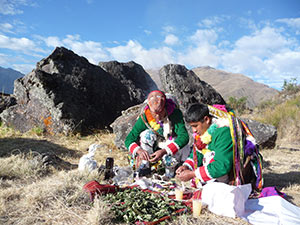 In the course of the morning, the K´achanpa group of dancers goes on a short pilgrimage to the Incan Sanctuary, to make an offering to the Pacha Mama (Mother Earth). Upon their return in the village, the procession of the two Virgins starts, as they are escorted by all dancers, musicians and authorities. In the afternoon, each group of dancers performs debuts, as well as theater-dance-type presentations, on the village´s Main Square.

Pilgrimage and General Performance of all Groups of Dancers 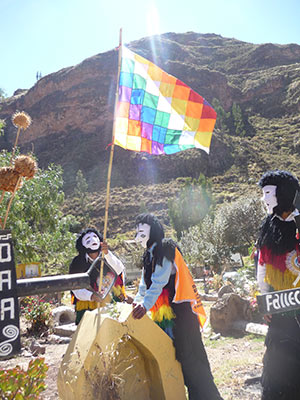 In the morning, the village´s cemetery converts itself into a place of emotional commemoration, as the groups of dancers and musicians visit their defunct group members and relatives, dedicating songs, drinks and even food, to them, as offerings.

In the sequence, near midday, the dancers´ general presentation starts on the Main Square. The full choreography of each group lasts about twenty minutes, in such a way that this celebration prolongs itself ´till the beginning of the evening. 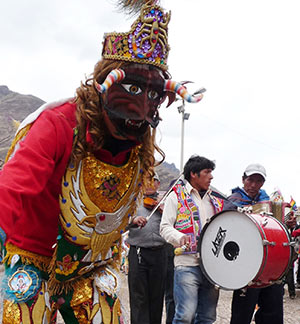 At noon, after the Blessing´s Mass, the Virgins are being prepared. Then, the Taller Effigy remains in the village´s church, while the smaller one returns to the farm´s chapel. The whole suite of masked dancers, musicians and authorities makes the procession very lively and emotional. Upon their arrival at the chapel, the Ch´unchu and Qhapaq Qolla groups of dancers dedicate a Ceremonial Farewell to the Virgin, while the other groups of dancers give her a Ceremonial Greeting, in order of arrival, as the “Praised” musical piece accompanies them. A deep religiosity is being perceived, throughout this whole act. 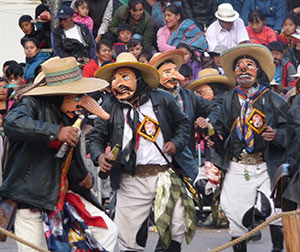 Well into the night, theatrical presentations are performed by the Orqo Saqra dancers who satirically present the symbolic burial of the current year´s Caporal, in the cemetery (representation of the end of harvests and of the transition to the fertile season). The K´achanpa dancers who present the ceremonial sowing of tubercles, on the square (beginning of the crops´ season), and the Qhapaq Qolla who simulate a caravan of merchants, offer a series of souvenirs and handicraft products on sale, evoking, in that way, the commercial relationship that has always existed between the ethnic groups of Puno and Bolivia, and the Quechuas.

At dusk, and almost nighttime, the stewards slowly start gathering on the Main Square, with the musicians and dancers. In the meantime, one can observe the curious apparition of men and of part of the musicians, dressed in women´s clothes. Then, the stewards (sponsors) show-up, hanging fruit, green leaves, serpentines and very colorful utensils, around the square and, finally, a very intense collective party gets set-up, with the slogan “Q´aya wata kama” (´Till next year).