On the Andean Textile´s tracks 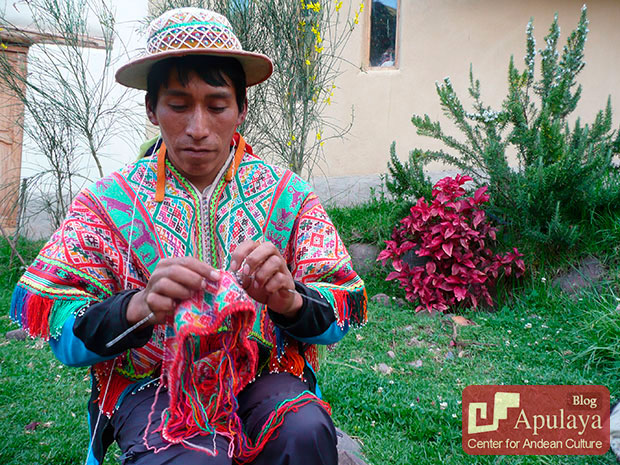 In the Andes, textile work is a millenary tradition, the institutionalized climax of which triumphed under the Incan State. Indeed, the Incas had integrated the specialization in the textile area, in their educational system. The best known of these high specialization institutions was the “Akllawasi” composed of rigorously selected female youth (akllakuna), who lived and worked under the direction and administration of “mamakuna” (Mature women forming a hierarchized team of specialists). 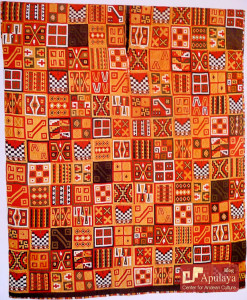 The textile´s technique and aesthetics had been developed to a high level, on the basis of what had been inherited from preceding civilizations, in such a way that textile pieces were true visual bibles that displayed a ‘doctrine’ that was both an offering and praise, based on beauty. Wearing an “unku” (Tunic), was like wearing an ideological cosmos on one´s shoulders. Textiles were also used as ceremonial garments, as much in daily life, as for death.

With the establishment of the Spanish Colony (1532), textile production went on to the “obrajes” (Mills) which were Spanish institutions, devoted to massive textiles production, to serve the interests of their owners who, in most cases, were “encomenderos” (Trustees), guided by that time period´s mercantile demand.

The proliferation of “obrajes” (1570) was detrimental to pre-Hispanic textiles´ quality and original context. Then, restrictions had to be added, as part of the Colonial State´s policy, such as, for example, the ordinances, issued in Chuquisaca, by Viceroy Toledo(1574 ANB.EC. 1974 n. 131, citado por Teresa Gisbert, Silvia Arze, Martha Cajías. Arte textile y Mundo Andino, pag. 10) who had said: “…and regarding these natives, they also adore some types of birds and animals, and for this effect, they paint and carve them on the cups they make to drink, and in silver, and on their houses´ doors, and they weave them on their altars´ front and back, and they paint them on the walls of churches. I order and command that those found should be scraped and taken off the doors they are on, and YOU SHALL ALSO FORBID THAT THEY MIGHT WEAVE THEM IN THE CLOTHES THEY WEAR, giving special care to this” (Translation by Apulaya). This shows that elements of the Andean religious system were woven in textiles, as well.

Today, the practice of weaving, among high Andean community members, is one of the cultural inheritances most in force, throughout the Andes. Amidst adaptations and changes, many techniques, types of looms and cultural patterns, subjacent to the Andean culture, keep on being used and applied in contemporaneous textiles, in high Andean communities. One of these patterns is the textile´s function, as part of a communication system.

What does learning how to weave a piece of Andean textile imply? Researcher Ruth Corcuera says that: “Thinking about textiles, as much historically, as in present days, remits to body protection and, at the same time, to communication. The visual and tactile aspects come into play. Textiles have been and still are carriers of messages, transmitted by means of their multiple displacements which are not only geographical, but, also, due to stays, through time” (Abal de Russo, 2010. Arte Textil Incaico. Prólogo, pag. 19).

Indeed, “this is reading iconography (Leey pallay)”, says Pedro, from the Community of Accha Alta, who is our weaving teacher, at Apulaya, as he shows us a set of iconographies, he wove in his poncho. Thus, in the perspective of today´s Andean weavers, a textile piece is an information panel, apart from being a useful textile piece and/or garment.

IS IT A KIND OF TEXTILE “LITERACY”?

Given that weaving icons implies conveying information, in order to rationalize and understand what he or she is weaving, a student who starts learning about the Andean textile world, needs to have, as a minimum, notions about cosmology and aspects of Andean astronomy, ecology, from the indigenous perspective, as well as about mythology, the religious and spiritual system, plant and animal reproduction and growth cycle, celestial bodies´ cycles and of those of the ritual calendar, since information of that kind are transmitted through iconography, in a polysemic way. Therefore, one must consider that this way of transmitting information, through textiles, is as ancient as human, in the Andes. 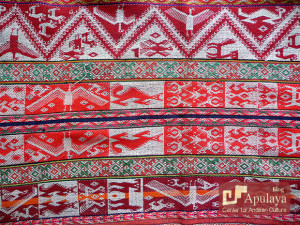 Let´s only remember the archaeological samples from pre-Hispanic civilizations, such as those of Caral (5000 b.C), Paracas (700 b.C. – 200 a.D.) and Wari (550 – 900 a.D.), among others. With due regards to Incan textile work, the designs that stand-out most are the “tocapus” which form a geometric kind of iconography, in the elite´s clothes, and are presently being decoded by researchers like Gail Silvermann (2012) who concludes that the iconography, called “tocapu”, formed by figurative and geometrical shapes, assumed the function of a non-alphabetical writing, in comparison with China´s ancient writing, or the Egyptian writing which consisted in hieroglyphs.

On one hand, if we remember the numerous pictographic series of the Moche civilization (100 – 700 a.D.), research concludes that these are not an individualistic and subjective art creation. Quite on the contrary, they narrate ceremonial calendars, rites, myths, real events and cosmology. On the other, the Paracas, Wari and Tiwanaku textile iconographies assumed the same function, among those of other pre-Hispanic civilizations.

Referring to the pre-Hispanic communication system, Raúl A. Sánchez (2012) says that “(…) the different material cultural manifestations (Textiles, ceramics, tattoos, etc.) do not contain simple stylistic allegories, as it was and still is believed to be so, up to our present days, but, rather, that they are messages and codes that convey ideas, feelings and stories” (pag. 4).

Therefore, if we refer to pre-Hispanic writing systems, we have the “khipu” (System of knots in strings of different colors and length) and the “qhelqa” (Boards with paintings on them), as well as the iconographic images, ceramics, lithic pieces (Carved stones), gold and silversmith works and, of course, the symbols, woven in today´s textile work.

CAN WEAVING A PIECE OF TEXTILE BE CONSIDERED AS PRODUCING ART? 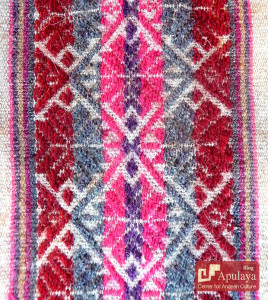 There is no translation for the term ‘art’ in the Quechua and Aymara languages which are mainly spoken in the Andes. In conventional, as well as in commercial language, Andean textiles are called ‘textile art’, and we would classify them as part of the visual arts´ family. Thus, an Andean weaver could say: “I am doing or weaving art” and his or her specialty could be denominated as ‘weaving artist’.

However, usually, an Andean Master Weaver does not consider him or herself as an artist, but, rather, as an “awaq” or “away kamayoq”; that is, a specialist in weaving. So, this leads us to reflect on the use of ‘art’, in relation with textiles, in the Andes.

We also see categorizations of the Andean textiles, as ‘major art’. However, we believe that the use and application of categorizations of exogenous origin, in this case, Occidental ones, should be handled with caution, since each technical terminology has its own range of implication, in accordance with the time period and place it appeared in. Indisputably, textile production is one of the high category achievements, in the Andes. But, the term ‘art’ is occidental, and has its own meanings and implications. The development of Andean textiles has its own history, in its own context, under its own cultural model.

THE ANDEAN TEXTILE AND ITS TECHNICAL LANGUAGE

The term used for the Quechua weavers´ activity is “away” which refers to the action of weaving or to the woven pieces themselves. The textile piece is obtained by weaving threads and, in the case of the belt loom, that technique is called “pallay” which, according to Cusco´s Academia Mayor de Lengua quechua (AMLQ, 1995), it means ‘to gather or recollect’. However, “pallay” can also refer to a set of iconographies, on a piece of textile.

There is a technical language, used by weavers, with relative variations, according to the region. Part of it has to do with the Andean philosophical thought current. For example, the loom´s parts, such as ‘teeth’, ‘neck’ and ‘heart’ have their reason to be. Likewise, counting threads, while weaving, is done in pairs, in such a way that a student who is being initiated to the world of Andean weaving, in some way, is already being introduced to dual thought.