Concept of Time in the Andean Thought

This essay´s goal is to get to know the concept of Time, according to the inhabitants of the Farming Communities of Accha Alta, in the District and Province of Calca, and Pomacanchi, in the district of the same name, Province of Acomayo, Cusco.

The community members of Accha Alta and Pomacanchi conceive the world in two time periods; one of them is the Ñaupa Time(Ancient, old or past time) in which people lived in sumaq kausayand allin kausaywhich corresponds to the time before the gentlemen farmers arrived. At that time, the runasknew how to take care of the food (mijuy) and, that way, they would conserve it better. Thus, the runawould give special care, respect and affection to food that was considered as sacred, and would contribute to the rites, so that there might be abundance and good quality of agricultural products.

Bringing those times back to their memory, the community members tell that the Earth (Pachamama) was treated in another way. Therefore, it would rain at the right moment, and would stop raining when it was appropriate. They say that, these are the reasons why, before, the people were very healthy, strong and lived many years. 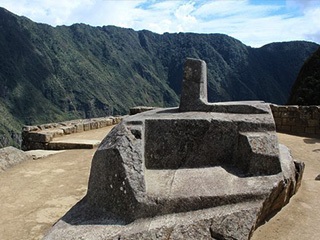 That reflection makes us remember that, on one occasion, during one of our research trips around Ocongate, a community member told us that he knew a man who lived nearby snowcapped Mount Ausangate, and had lived, healthy, for over 100 years. Likewise, in Accha Alta, an old lady told us that: “Before, the people were very healthy, because we used to eat healthy and mature food. In turn, now, people don´t let the products mature on the land, and thus, they get ill and die very young.” (Doña Fabiana)

The other Time is theQhepa Time (Present Time); that is, the time after the gentlemen farmers´ arrival. According to the community members, the gentlemen farmers started to mistreat the food, and thus, little by little, the agricultural products escaped to other places, and food shortage (muchuy) appeared in the villages.

Likewise, after the gentlemen farmers´ arrival, the millay kausay; that is, the disorderly life, within the family and community, began to appear. According to the community members, these factors could be provoking the alteration of the climatic behavior, the apparition of new illnesses and other detrimental things for their communities and inhabitants. In that way, Don Andrés Flores told us that, after the gentlemen farmers´ arrival, themana allin kausayor millay kausaygot worse.

Perhaps, that way of thinking is due to the fact that, since the beginning of the colonization process, in many cases, the runawas deprived of his land, mistreated by the colonizing gentlemen farmers, and submitted to forced labors, for being ‘Indian’. 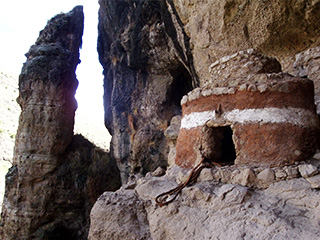 Another way for the runato conceive Time is the Ñaupa Time, when only the ñaupa machus ormachulas (1)(ancestors) lived, under the Moon´s light. The community members tell that the ñaupa machulas lived their lives like us, as they had lamas and other animals.

Thus, they built homes and, as those societies disappeared, they left their houses abandoned (today´s archaeological sites), where their entities, called soq´a, still live and, generally, come out at night, under the Moon´s light, in search of their victims (the runa), to make them ill and even kill them. They say that the ancient machuladied, burnt by the Sun´s rays, at the time the Sun appeared. But, the soq´a (2)awaken when the Sun sets, and start to talk among them, as they interact and move from one place to another.

When the Sun appeared, the machulas´ time ended, and the runa´s time began. Since that time, the runalive under the Sun´s light, but, there will also be an end to their time, although no one knows when that will be. Perhaps will it be when the runa´s time will end, and another time will appear. In the community members´ way of thinking, the new time, that will come, will probably have them live in sumaq kausay, like the birds.

That way, the interaction between the past and present is very clear in the runa´s mind, as neither one of them is separated from the other. With due respect to this, Anthropologist and Sociologist George Balandier indicates the following: “Traditional societies don´t separate the present form the past which can always be updated (…), as the great periodical rituals confirm the regularity of the course of things, and contribute to the expulsion of illnesses and disorders and, above all, to maintaining power, as they revitalize it” (Balandier, 1988, p.286).

Now, ñaupaor ñaupaqand qhepaare polysemic words. On one hand, ñaupa orñaupaqmeans before, ancient, but, also, up front, and qhepameans behind or after, and is also related to the present and future, in such a way that, in the Andean way of thinking, time is framed in two categories: ñaupa or ñaupaqand qhepa. Regarding this, Josef Estermann mentions that: “Thus, the Andean Time is not unidirectional (from past to future), but, rather, bi- or multidirectional”.

(1) Ñaupamachulas: The ancient, ancestors or people who lived in a time prior to today´s humanity.

(2)Soq’a machu: The ancestor´s spirit that takes on a human shape, to appear before their victim, so as to make them ill, afterwards. The illness provoked by the soq´a machuis called soq´a onqoy, and consists in losing weight until the articulations dislocate and, finally, the affected victim dies.