Fiesta in the Andes!

In the Andes, the annual cycle is marked by a series of festive celebrations. In their majority, these celebrations have pre-Colombian roots, in which, today, one can appreciate a syncretism of both Andean and Christian influences, as a product of the Christianization process.

Throughout the year, we will focus on festivities, in our surroundings, in Cusco, which go from traditional family celebration, to pompous patronal festivities that last several days.

RECIPROCITY WITH THE ANCESTORS AND NATURE (MOTHER EARTH) 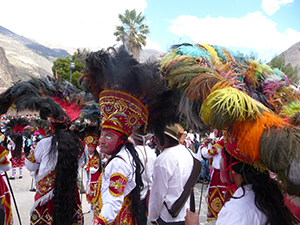 On specific dates, it is common that families celebrate traditional ceremonies, in honor to sacred places, with diverse purposes that can range from a routine reciprocity ceremony, on to pilgrimages and ritual purifications, to complex reproduction and fertility propitiation ceremonies. The most important celebrations of that type take place in the month of August and during the Carnival season. In general, purification ceremonies take place between Christmas and the end of the year. Rites in honor to the ancestors and defunct are especially celebrated on the second day of November, and in the course of Easter Week.

FESTIVITIES FOR THE SUPERNATURAL PATRONS AND FEMALE MAYORS 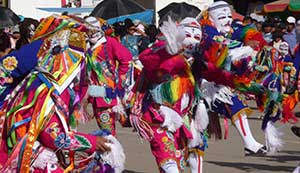 Collective celebrations have their roots in the indigenous ceremonial calendar, and present a touch of Andean and Catholic syncretism. Thus, many of them bear names allusive to diverse catholic male and female saints who have become the patrons of specific places.

In terms of financing and logistics, festivities are sponsored by individual families and, in the celebration´s final stage the position in charge is passed on to the family who will assume the event´s whole organization and performance, the following year. The whole sequence of the mega-event takes place in strict coordination with the Catholic organization. But, it is interesting to observe that the apparent catholic celebration is combined with indigenous cultural elements and sequences full of complex symbols and codes. Actually, choreographies, costumes, musical instrumentations and liturgical sequences, among other components of the celebration, convey an interesting range of information, in terms of myths, history, cosmology, religion and Andean spirituality.

Many male patron saints have received the name of Taytacha (Father), and the female saints, the nickname of Mamacha (Mother or Matron), and the latter are considered as female mayors of the village which they are part of.

So, the whole event is dedicated to the male and female patrons, mamachas and female mayors who take care of the welfare and order, in the village. Masked dancers, with their rich costumes, zoomorphic representations, with their falsetto voices, men dressed as women (waylakas), and each group, accompanied by their respective groups of musicians, are the main protagonists.